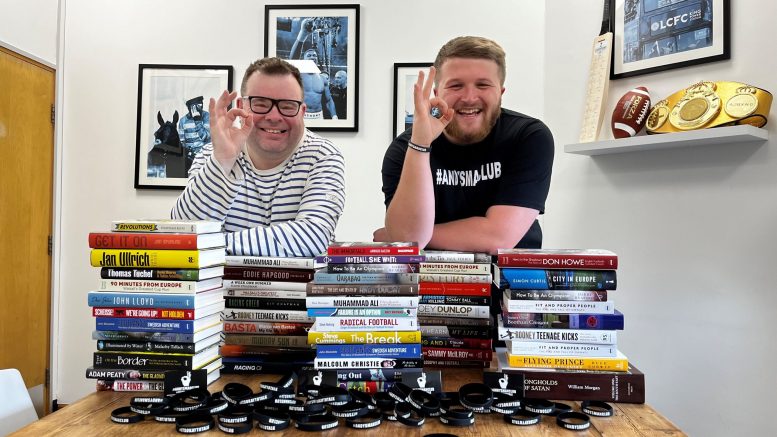 Men’s suicide prevention charity, Andy’s Man Club has received a donation of books from the entries for this year’s William Hill Sports Book of the Year Award.

Following a record 158 books entered into this year’s Award, featuring a diverse mix of authors across a wide range of sports including tennis, rugby, football and cycling, over 1,000 copies have been donated to the nationwide club to support men going through a difficult time.

Amongst the books donated were My Ryder Cup Journey by retired golfer Tony Jacklin, Don Revie: The Biography by Christopher Evans and The Beautiful Game and the Ugly Truth by rugby league footballer, Kieran Gill.

Andy’s Man Club is a men’s suicide prevention charity which was founded in 2016 by the family of 23-year-old Andrew Roberts who took his own life.

With now over 100 clubs throughout the UK, the group hosts weekly sessions at dedicated sports venues and other locations, providing men over the age of 18 space to talk about their mental health. Since launching, the club has helped thousands of men come through difficult times in their lives.

“Many people find comfort reading about the experiences and thoughts of others and we believe that books can have the power to be life changing. Andy’s Man Club is a fantastic charity, that supports hundreds of men every week and we hope that their members can gain some comfort and inspiration from the range of great sports books that were nominated for this year’s William Hill Sports Book of the Year Award.”

A spokesperson for Andy’s Man Club commented “We are hugely grateful for the donation of a wide variety of books to our charity.

“We’re positive that these books will be well received by a number of our volunteers and group members who might find solace in the range of topics covered from this year’s entries.

“Thanks again to William Hill Sports Book of the Year for your generosity.”

Flushing away inequalities with £89,250 for new Changing Places toilets in Kirklees

International Clinical Trials Day: Two hundred and seventy-five years of research, and it all started with an orange