Important This Event Calendar is not maintained on a daily basis and some events may have changed dates or are no longer happening. Please double-check the event websites for the most up-to-date information. 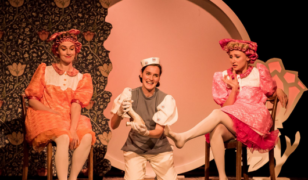 The family-friendly chamber opera, which stars seven singers and a pianist, will be directed by Laura Attridge and conducted by Iwan Davies with Nikki Martin in the title role and Camilla Seale as her Prince Charming.  The simple but inspired production, designed by Anna Orton, is sung in French (with English surtitles) with English dialogue.  Power house composer Pauline Viardot has only recently come back into vogue, but she was revered in her lifetime, as Berlioz put it, as “one of the greatest artists in the history of music”. She sang, she played the piano, she hosted artistic soirees and, after retiring from the stage, she focused on composing. Two hundred songs and several operettas later, Cinderella is thought to be one of her finest.

Commenting, Buxton’s CEO Michael Williams said: “Cinderella was an absolute knock out with audiences at the 2021 Buxton International Festival. It has a score where sumptuous melodies abound, vocal lines soar, and the Cinderella tale is told with a great big smile – family fun at its best.