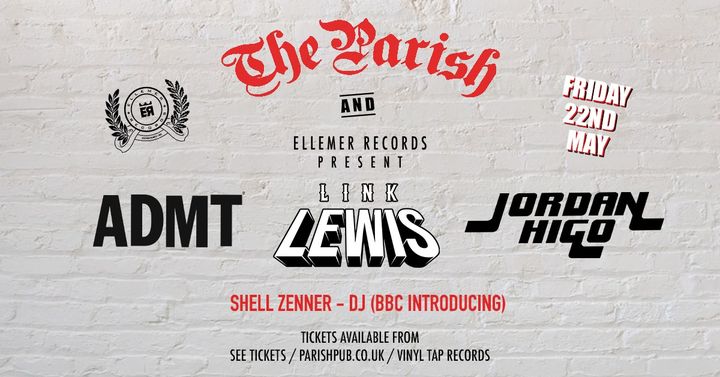 Ellemer Records are hosting their first ‘Ellemer Presents’ show with a huge line-up of talent at ‘The Parish’. The Huddersfield label will be showcasing their work with local artists ‘Jordan Higo’ & ‘Link Lewis’ as well as Doncaster’s incredibly talented ‘ADMT’.

Fast rising UK soul artist Jordan Higo has made a big impression with his debut singles and EP ‘American Woman’. The mellow, downtempo RnB vibes of Lock & Load lead to press acclaim from Earmilk and a BBC Introducing live session, while the funky electro-soul of follow up track ‘Less’ was placed on New Music Friday in 5 different territories and gave him his first BBC 6music airplay.

Influenced by Classic Rock, RnB and the contemporary sounds of heavyweights like Miguel and Drake, the Huddersfield singer-songwriter dropped his incredibly diverse and impressive EP ‘American Woman’ in August 2019.

Since dropping his debut release in late 2018, fast-rising UK RnB/Pop singer-songwriter Link Lewis has been picking up acclaim everywhere he goes, quickly racking up over a million streams with just his first 5 singles.

Having recently signed a publishing deal with Warner Music UK, recorded a live session with BBC Introducing and performed at Ibiza Rocks, Tramlines and Bestival, the British Artist and multi-instrumentalist has begun putting his stamp on the Indie RnB/Pop genres with his distinctively soulful voice.

A master of intricate experimental indie, ADMT launches RIVER, the follow up to his debut DEMONS, which captured hearts and ears alike. ADMT is Adam Taylor, originally from Doncaster, whose unique sound falls somewhere between soul, pop and RnB, and who finds himself currently sat on a wealth of unapologetically catchy songs, taking inspiration from love, loss, heartache and growing up as a young man in the 21st Century.

He brings his reliable lyricism to life with insatiable melodies and slick production. Having already scooped support from Huw Stephens at BBC Introducing, who haled his debut as a “stunner”, the future is already looking bright and prosperous for ADMT.