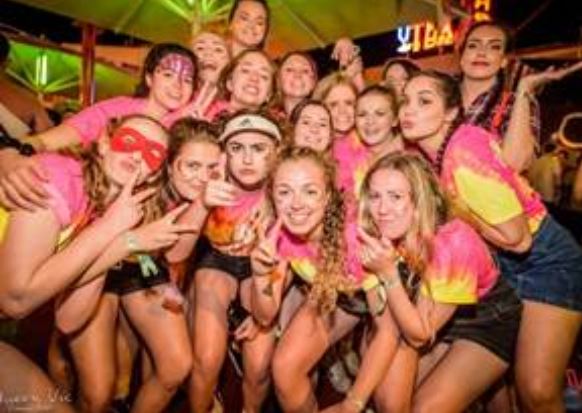 A Loughborough University graduate who passed away in August last year from a brain tumour, aged 25, has been remembered by friends and family as they cycled the 145 miles from Loughborough to her hometown of Brentwood in Essex.

Ria Melvin, who graduated with a first-class BSc Hons degree in sports management, was diagnosed aged 23 in December 2018 with a glioblastoma (GBM), which has an average survival prognosis of 12 to 18 months. Ria underwent surgery, chemotherapy, radiotherapy and immunotherapy treatment in Germany, but nothing could save her.

Shocked at the lack of options available to brain tumour patients, Ria worked with the charity Brain Tumour Research while undergoing treatment to campaign for change, including communicating with her local MP Alex Burghart, who was then one of the Prime Minister’s private parliamentary secretaries.

Ria’s grieving family have launched a Fundraising Group in her memory under the umbrella of Brain Tumour Research, to be known as Raising4Ria, and have taken part in an epic cycle challenge during the Platinum Jubilee celebrations which was organised by a university friend of Ria’s.

Sofie Armitage, 27, from Huddersfield, who played football alongside Ria on the same Loughborough University team, gathered together a team of 20, including Ria’s mother Carol, sister Kaz, Ria’s Essex football friend Kelsey Phillips, herself and 16 other of Ria’s university friends who also all played football for the uni, as well as one of their dads who is a cyclist.

Sofie, a sports and exercise science graduate, now working for St John Ambulance, said: “Ria and I were best mates at uni and enjoyed many Wednesday football games, football tours abroad and nights out together. I especially treasure my memories of the fun we had together at various festivals including Parklife in Manchester, which we attended whilst Ria was going through treatment. Also my birthday weekend with the girls, which Ria travelled to straight after returning from private treatment in Germany, and not forgetting a very soggy camping trip to Mersea Island. Despite all she was going through, Ria was still laughing and enjoying herself.

“Ria was so inspiring before she was cruelly snatched away and she continues to inspire me. I have taken on a number of charity fundraising challenges in her memory, including two half marathons in Loughborough and Leeds, a skydive, Dry January, and am looking forward to doing the London Marathon for Brain Tumour Research in October.

Calling themselves #Ria’sRiders, the team put their pedal to the metal over two days from the 2nd to 3rd of June.

Ria’s sister Kaz, a neuro-physiotherapist who lives in Chelmsford, said: “We’re so grateful to Sofie and all of Ria’s friends for organising this fundraising event to keep Ria’s memory alive. It has been nearly 10 months since we lost Ria and we miss her so much every day. Events like this give us a way to channel our grief in a positive way.

“Ria had a special place in her heart for Loughborough University, she absolutely loved her time studying and playing football there and made great friends and memories. So it’s only fitting that we cycled from Loughborough to Ria’s resting place at Herongate Wood, near Brentwood.

“We are also using this event as an opportunity to launch our Fundraising Group ‘Raising4Ria’ to continue to raise funds to help find a cure for brain tumours so that other families don’t have to go through what we have.”

Brain tumours kill more children and adults under the age of 40 than any other cancer, yet historically just 1% of the national spend on cancer research has been allocated to this devastating disease.

Charlie Allsebrook, community development manager at Brain Tumour Research said: “We are very grateful to Ria’s family and friends for their support in her memory. At the charity, we have very fond memories of working with Ria. Her courage and determination to push for change, as well as fundraise, in spite of everything she was going through, were so inspiring. And we welcome Raising4Ria to our brain tumour family – it is an honour to be continuing the relationship with Ria’s loved ones.

“Ria will never be forgotten. Her story reminds us that just 12.5% of those diagnosed with a brain tumour survive beyond five years compared with an average of 50% across all cancers. We cannot allow this desperate situation to continue. Brain Tumour Research is determined to change outcomes for brain tumour patients and ultimately find a cure and we are striving to ensure that Ria’s legacy helps to achieve this vision.”

Brain Tumour Research funds sustainable research at dedicated centres in the UK. It also campaigns for the Government and the larger cancer charities to invest more in research into brain tumours in order to speed up new treatments for patients and, ultimately, find a cure. The charity is the driving force behind the call for a national annual spend of £35 million in order to improve survival rates and patient outcomes in line with other cancers such as breast cancer and leukaemia and is also campaigning for greater repurposing of drugs.

Speaking after the event, having raised over £11000, Sofie said: “I wore a necklace with Ria’s fingerprint, and we all shared memories of Ria along the way. It was the first time all the girls who played with Ria in one of the university football teams had all got together since university so it was very special.

“The first day – Thursday – was very hot and so we ended up with quite a few tramlines from our cycle vests or t-shirts, but had no lasting effects from cycling 145 miles due to all being pretty fit anyway.

“We all agreed that we wanted to do an annual challenge, even if it’s not cycling, to keep Ria’s memory alive.”

To add your donation in Ria’s memory go to www.justgiving.com/fundraising/Loughborough2Essex

‘Give Running a Go’ with Stadium Runners

Issue 33 of the Society’s Journal