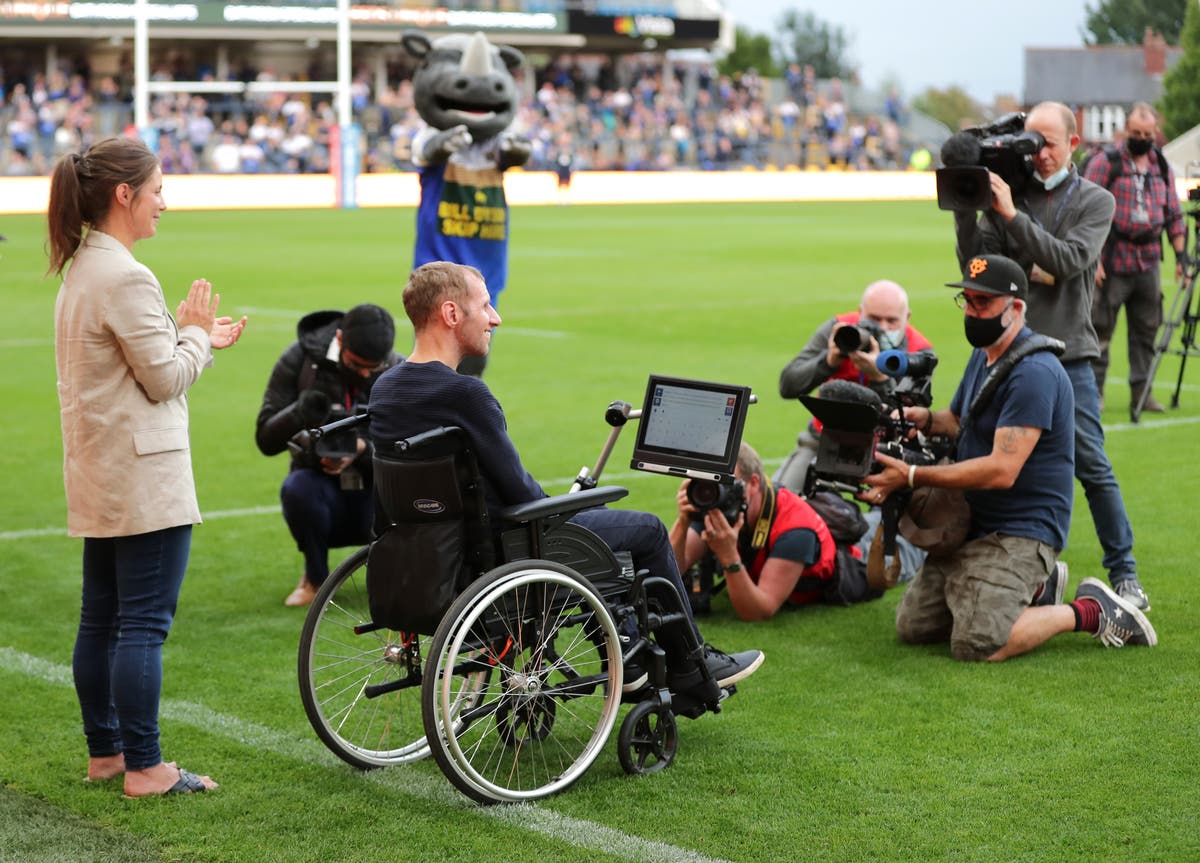 Leeds coach Richard Agar admits the crowd reaction to the appearance of popular former player Rob Burrow may have contributed to an 18-12 victory over Huddersfield that keeps alive their Super League play-off hopes.

Former Great Britain scrum-half Burrow was given a rapturous welcome as guest of honour at Headingley on the day of the launch of his autobiography ‘Too Many Reasons To Live’, the story of his battle with Motor Neurone Disease.

The 10,000-strong crowd then roared its approval as his three children presented the match ball to referee Ben Thaler and he told them: “I will never give in.”

Agar said: “All the boys made a point of seeing him in the tunnel and he certainly inspired the crowd.

“The reception he got was obviously expected but it was still very emotional. His children bringing the ball in and him clapping the crowd were special moments and we should savour them.

“I thought the crowd got really involved tonight and played a part.”

The fans clapped in the seventh minute as a mark of respect for the former Leeds number seven and they were cheering again when acting captain Ash Handley opened the scoring, finishing off a break, fittingly from scrum-half Callum McLelland, for his third try in as many matches.

Huddersfield drew level with a try from stand-off Will Pryce, but the Rhinos gradually got on top and scored further tries through Richie Myler and Robert Lui to lead 18-4, before Huddersfield grabbed late consolation tries through Sam Wood and Owen Trout after the home side were reduced to 12 men with the sin-binning of Zane Tetevano.

Agar added: “I’m really proud of the team. It was a really spirited and committed performance.

“Huddersfield can prove a tough team to break down. After making so many changes, I can understand why our attack was not as fluent or fluid as we would have liked but we had to play that way to gain the ascendancy.

“It was a game we dominated for long periods and I’m not sure how ended up only six points in front on the scoreboard. I thought we were much better value. There was a bit of fatigue factor after we went down to 12 men.

“We had to do what we had to do and I thought we did it well. We had more than 50 per cent of our salary cap out but I thought a lot of our young players were great again.

“Morgan Gannon is still only 17 so I don’t want to put too much pressure on him, but it was a step up for him tonight. It was a real 80-minute eye-catching, impressive performance from him.”

Huddersfield were hit by the late withdrawal of experienced stand-off Lee Gaskell with a recurrence of an ankle injury as they went down to a second successive defeat.

“We had to send him for a scan at five o’clock,” coach Ian Watson said. “He had 10 weeks of rehab and trained with the team this week with no reaction, but last night he had some kind of reaction.

“He would have massively helped tonight. Leeds had the quality of Rob Lui and we’ve a lot of guys learning in that position at this moment in time.

“We’re a tough team to beat but we’re getting beat at the moment through our naivety. It’s great for the learning and the development of our young players, but we need to be smart in certain areas.

The Premier League champions and the Tottenham striker both failed to score. The Independent – Huddersfield…

As part of this year’s Heritage Open Days, there’s an opportunity to: Delve into the past and meet Sir John William Ramsden as he plans the layout of this historic […] Huddersfield Local History Society …