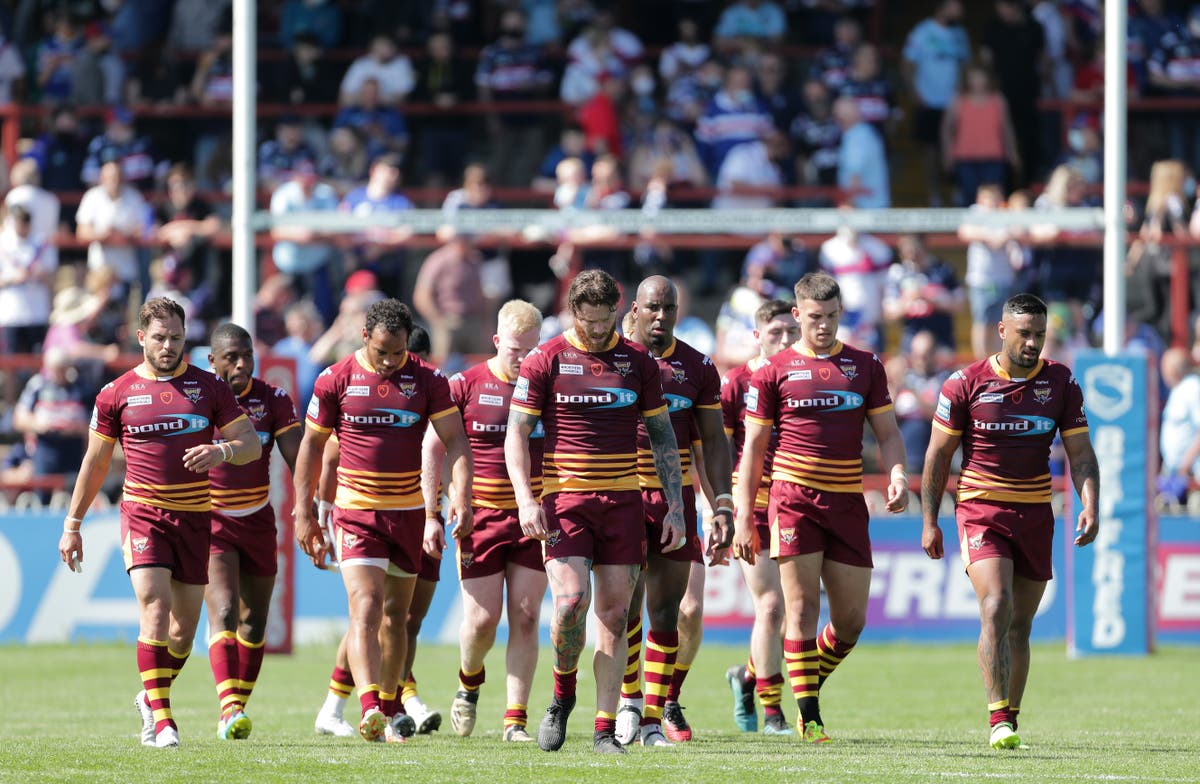 The Giants have reported seven positive tests, with other players deemed to be close contacts, which is enough for the Rugby Football League to order the closure of their training ground and call off the round nine fixture, which would have been their first at home in front of fans for 15 months.

Friday’s game at Headingley, which is due to be televised by Sky, may follow suit after the RFL announced the Rhinos are currently awaiting the result of a PCR test on one of their players which could rule out a number of others through test and trace analysis.

Despite having only 17 players available, Huddersfield were still keen to play the game but the decision was taken out of their hands.

They will now seek to rearrange the fixture, possibly on the weekend of the Challenge Cup final on July 16-18.

It is the first fixture of the 2021 Super League season to fall victim to the pandemic, which caused havoc in 2020 and prompted the RFL to rule that league positions would be determined by win percentages.

The amended format was maintained for this season and extended to both the Championship and League 1 with the likelihood of more fixtures being postponed and unable to be rearranged.

The Championship match between Halifax and Sheffield Eagles in May was postponed after two Eagles players returned positive tests and five more were forced to isolate under track and trace regulations.

Sunday’s Women’s Super League derby between St Helens and Wigan has been called off after a Saints players tested positive in the wake of Saturday’s Challenge Cup final victory over York and more than five of her team-mates were ordered to self-isolate for 10 days.

Huddersfield and Leeds, who were both forced to close their training ground for five days in January due to a spate of positive tests, were inactive last week after being knocked out of the Challenge Cup and gave their players time off.

Wakefield coach Chris Chester, who cancelled his players’ planned leave after rearranging a league game against Leigh at the weekend, believes the latest outbreak suggests that players may have become complacent.

“It’s no coincidence that some teams have been given time off and maybe they’ve been a bit too relaxed with everything that’s going on around us,” said Chester, who says his squad are Covid-free.

“This is a harsh reminder that it’s not gone away and we need to make sure we keep sticking to the guidelines because we can’t afford another year like we had last year.

“It’s a case of common sense and trying to stay in your bubble but I think we probably have to look at some stricter protocols, staying out of pubs and coffee shops.

“I can see the guidelines that were there 12 months ago being slowly reintroduced over the next week or so.

“It’s important that we’re sensible and do the right thing when we’re away from the ground. We’ve got to make sure we’ve got a game in a couple of months’ time, we can’t afford to slacken off.”

Performed by Mikron Theatre Company, and centring around the short-lived Huddersfield Atalanta Ladies FC, the show really excels in its intricacies The Independent – Huddersfield…

Friday’s game between Huddersfield and Wigan is off and St Helens’ trip to Leeds could go the same way. The Independent – Huddersfield…

His previous deal expired next summer. The Independent – Huddersfield…

None of bottom three Fulham, West Brom or Sheffield United managed to reach 30 points this season – a first for the competition. The Independent – Huddersfield…