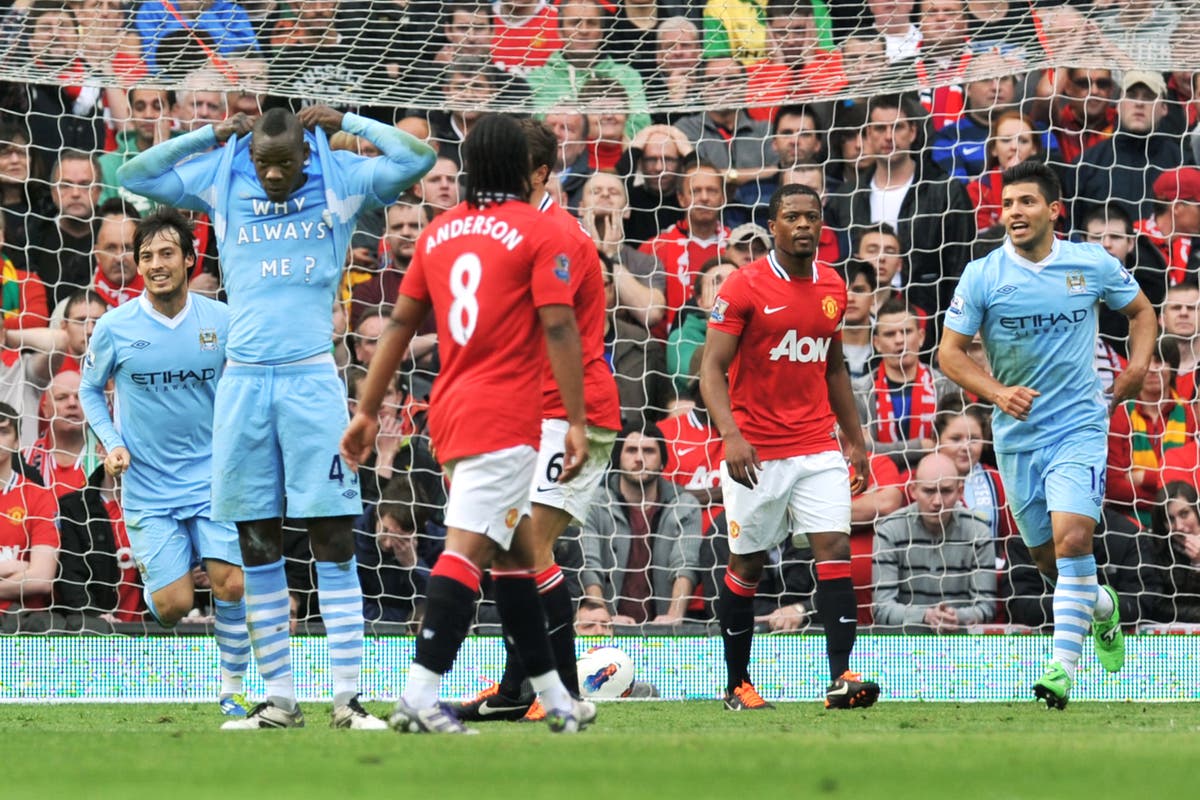 Manchester City’s exhilarating rise a decade ago came with fireworks both on and off the field.

After a couple of years being regarded as mere ‘noisy neighbours’, City proved they were a genuine force when they thrashed arch-rivals and reigning champions Manchester United 6-1 at Old Trafford on October 23, 2011.

As statement victories go, it could not have been more emphatic. It marked out Roberto Mancini’s men as serious Premier League contenders and the balance of power in their own city, to the delight of their fans, was shifting from red to blue.

There were still a few more dramatic instalments to go en route to City’s title success that season, but there was no mistaking their power as they inflicted United’s heaviest derby defeat since 1926.

“We wanted to win that game to prove to everyone that we were serious about this league,” said City defender Joleon Lescott

“We had an extra motivation because no one was taking us seriously outside the club, (saying) we were only together because Man City were throwing money at all of us.

“That was the perception but it wasn’t the reality of our motivation. We believed we could challenge and be successful.

“Obviously (there was) a period where it was closer and then they were in the lead, but we knew if we won that game everyone was going to take us seriously.”

The day began with Mario Balotelli the mercurial and controversial striker who rarely seemed out of the headlines, in the media spotlight yet again after a blaze at his house started by fireworks set off from his bathroom.

The Italian shrugged off the furore to create more headlines on the pitch by scoring City’s first two goals either side of United’s Jonny Evans being sent off. Sergio Aguero followed up with a third.

Darren Fletcher pulled one back but the visitors ruthlessly finished the job in the closing minutes.

Edin Dzeko claimed City’s fourth before David Silva added another and then released the Bosnian to make it six with a brilliant volleyed pass.

“We never felt stretched, even though we knew United were a top team and a good bunch of players,” said Lescott, who teed up Dzeko’s first goal. “As soon as they went down to 10 men, we knew we were going to win that game.

“If we had to attack as a team or defend as a team, whatever scenario, we were comfortable in our roles. We knew it was going to be difficult for them with 10 men and we believed we could win.”

One of the most enduring images of the day is that of Balotelli lifting his shirt after sidefooting home the opener to reveal a T-shirt asking the question ‘Why Always Me?’, a clear reference to his frequent tabloid appearances.

“Mario asked me that morning if I would print something on his compression shirt under his match shirt,” Les Chapman, who was the team’s kitman at the time, told the PA news agency.

“I said yes, as I’d done it for a few other players, as long as it wasn’t offensive. There were one or two suggestions that I couldn’t do but then he just came out with that.

“As soon as he said it I thought it was absolutely perfect. He’d been making the headlines for some bizarre reasons and was always in the news. I suppose that was his way of asking, ‘Why always me?’.”

In terms of the action, Balotelli and the rest of the team delivered that day. It was an afternoon those involved in will long remember and, for the club, indicated something far more significant than simple derby bragging rights.

“I think that’s when we started to realise the tide had turned,” said Chapman, who had a long career as a midfielder with clubs including Huddersfield and Oldham before spending 17 years on the City backroom staff.

“They were always the masters in Manchester but we had just started to sign world-class players and they were starting to gel.

“We had always been in the shadow of United but at that point we started to overtake them and that result compounded it.”

The Blades take on Nottingham Forest in the Championship play-off semi-finals. The Independent – Huddersfield…

The south-coast rugby league side play their first Betfred League 1 match this weekend. The Independent – Huddersfield…