Huddersfield’s most outstanding landmark has been a geographical and social feature from prehistoric times up until the present day. The Castle Hill itself is 901 feet tall and its isolation and distinctive shape make it easily recognisable from the surrounding moors and from the streets of Huddersfield. Castle Hill is a scheduled ancient monument and has been home to stone and Iron Age settlers, an ancient British stronghold of the Brigantes and a motte and bailey Norman castle. 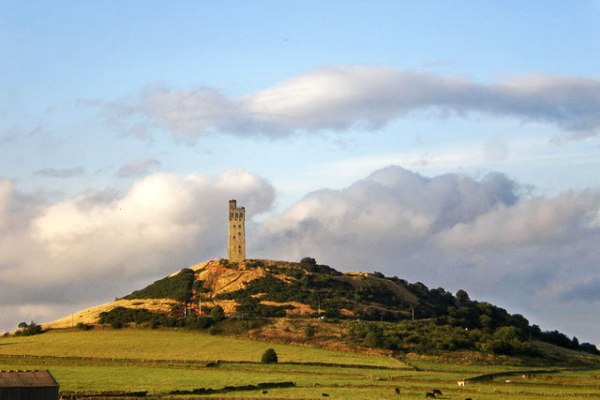 The hill was and still is a popular tourist destination which is easily accessible, with the Victoria Tower, opened in 1899, being the most recognisable feature.
The history of human activity on the Castle Hill goes back over 4000 years. The site was developed as an iron age hill fort, surrounded by defensive ditches and ramparts. In the Middle Ages there was a castle on the hill, of which the well remains.

During 1849, the Victoria Prospect Tower Company was formed in Huddersfield with the aim of raising money to erect a tower on Castle Hill in honour of Queen Victoria, perhaps inspired by a similar scheme in Derbyshire which saw the building of the Victoria Prospect Tower at Matlock in 1844.
Plans for the tower were prepared by architect William Wallen (who also designed the George Hotel and later the Castle Hill Hotel) and a scale model was exhibited in the various shops in the town. It was even suggested by Wallen that the elevation of the tower would provide a vantage point to view the North Sea.

The proposed tower was to have been 80 feet high on a base measuring 12 square yards, and would have comprised:
a basement "for shelter and the resort of the aged"
a porter's lodge
a museum "for the reception of antiquities found in the district and geological specimens"
three public rooms "for refreshments"
a terrace at the top measuring 10 yards square
a private room and terrace for subscribers

No camping, barbeques or fires are allowed due to the damage that has been sustained to the ancient monument and vegetation. The use of kite buggies is discouraged due to the damage they can cause to the monument and in regards to safety for other visitors. Castle Hill has unpredictable winds for any kite flyer and they should not be used in high winds or thunderstorms.